Background
A Silva Matos (ASM) began as a company specialising in stainless steel structures for the food, chemical and pharmaceutical industries, among others, and located its activity to Sever do Vouga. Currently with about 400 committed and motivated employees, ASM offers to customers, partners and the entire market in general, a wide range of products and solutions adapted to major equipments and services markets including Oil & Gas, refineries, chemical, petrochemical, food and transformation industries.
The TURTLE project - Autonomous Support System for Subsea Operations - provides a set of tools to accelerate field testing of new technologies for continuous ocean observation systems, with solutions that are repositionable, through a heterogeneous mobile network, establishing itself as an alternative to fixed structures, which are commonly used to ease the challenges of depth.

The overall objective of the TURTLE project aims to develop key technologies for sustainable and long-term presence in the deep ocean.

Consulting  Approach
Several meetings took place between members of the Consortium. It was necessary to have a feasibility study supported on all the studies needed for the R&D project, which included the construction of the prototype and many other investments. New business opportunities in new markets had to be considered taking advantage of new actual international presence.

Thus, the Consortium wanted to develop the business plan, the feasibility study and obtain funding, which included an application for an EU grant (Technological R&D Grants System). Mercal helped the consortium establish a diagnosis of the project and search for its framework and EU funding.

Outcome
Mercal supported the R&D Invest Plan and Management, establishing the investments and financial sources for each of the partners related to this project. Moreover, Mercal supported the management and control of the project through all milestones, assuring the financial sources at each phase and the communication process within official entities and the Consortium.
The R&D project was a success with the implementation as expected in its objectives and granted. The TURTLE project has developed key technologies for ASM Metalomecância to explore the deep ocean a long term, in a sustainable way. The TURTLE project showed a clear added value for ASM Metalomecânica, also to the future of the company, with clear connection to the area of activity of the company. By potentiate a shed designed strategy will allow future growth of the company.

The project started in January 2014 and ended in June 2015, involving a total investment of over one million Euro, funded in the amount of about 60%. 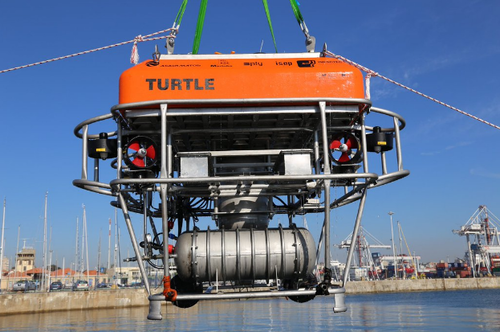